Two CSD employees got the chance to witness history last night. The Dallas Cowboys played against the Houston Texans at AT&T Stadium. What the employees were there for, however, wasn’t just the game. They were there primarily for CSD’s Home Game Auctions, which take place in many NFL stadiums each season.

Getting to go to any game at AT&T Stadium is exciting. When it’s a Dallas Cowboys game, preseason or not, there are a ton of people. You can literally feel the energy in the air.

The duo got there early to learn about how CSD sets up each Home Game Auction location. One employee was able to take photos of  our set ups.

Each Home Game Auction event is basically a silent auction. A fan bids on an item and gets to take the prize home at the end if they win. Our Home Game Auctions are very popular at AT&T Stadium.

Relive the night by looking at some photos he took. Although he is not a professional photographer, a lot of these photos are fun to look at and good quality. 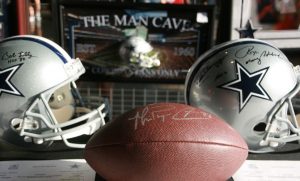 Showing off the Man Cave, autographed helmets and footballs. 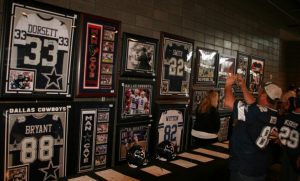 A Dallas Cowboys fan snaps his own photo. We don’t blame him. 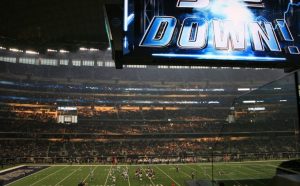 Our employees got to enjoy the game during breaks. Look at that mega screen!

The Dallas Cowboys ended up being defeated by the Texans, but our boys had a great night!